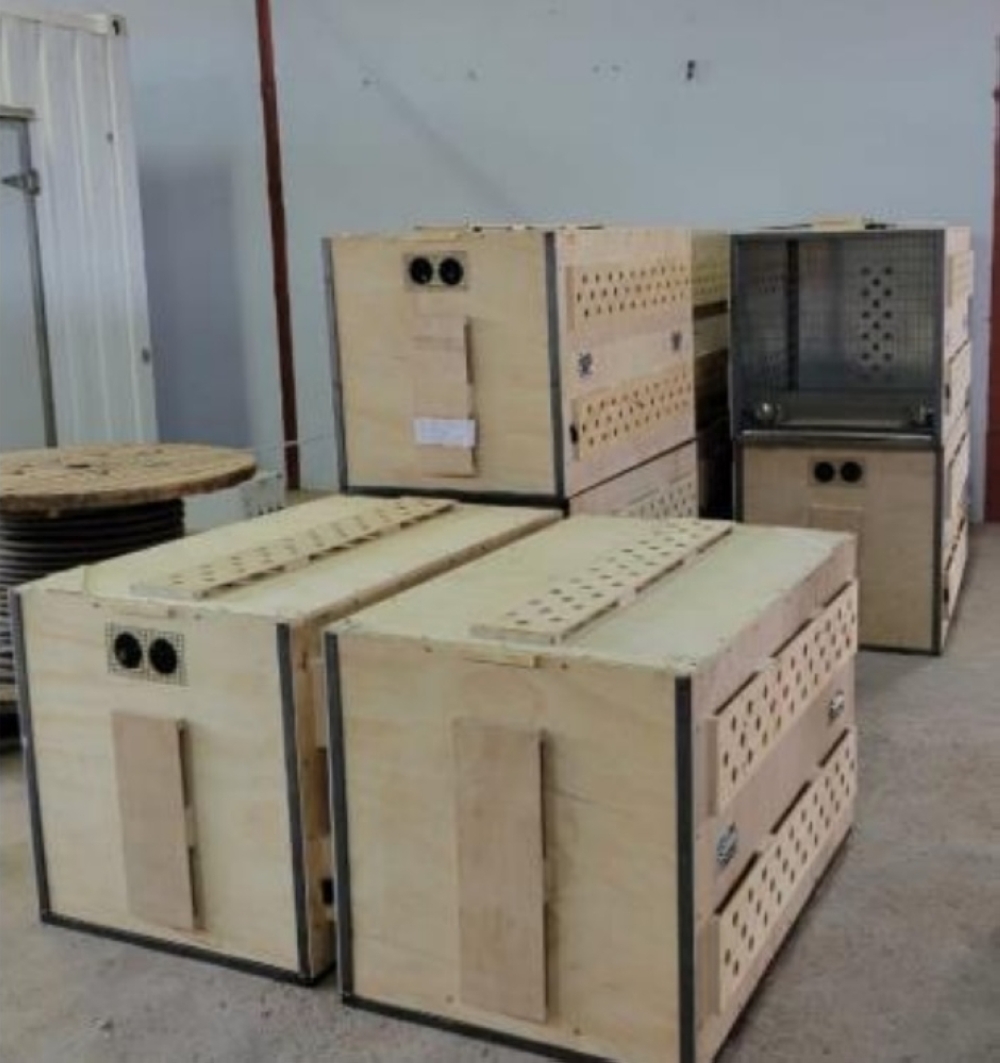 The cheetahs will be transported in these crates. The cheetahs will be loaded onto a private B747 jet. The plane will fly overnight and land in Jaipur, India, by daybreak.

Excitement is running high for the eight Namibian cheetahs heading to their new home in India on Friday.

Cheetah Conservation Fund (CCF) staff will travel to India to deliver this very special gift from the Namibian government.

This group of iconic, spotted big cats is making history as the first to be translocated from southern Africa to Asia to create a new metapopulation, in a place where cheetahs once roamed freely, but were decimated more than 70 years ago.

Namibia, the country that has traditionally had the greatest density of wild cheetah, is donating the first eight individuals as part of a larger, multi-year agreement to help conserve the species through India’s Project Cheetah.

Three Namibian male and five female adult cheetahs (all between 2 to 5 ½ years-old) will make the 11-hour, transcontinental journey to India’s Kuno National Park on 16 and 17 September. Each has been vaccinated, fitted with a satellite collar, and kept in isolation at the CCF Centre in Otjiwarongo. The cheetahs were selected based on an assessment of health, wild disposition, hunting skills, and ability to contribute genetics that will result in a strong founder population.

The mission to move the cheetahs starts on Friday afternoon with the transfer of cats from the CCF Centre to the Hosea Kutako International Airport in Windhoek. After a brief ceremony to acknowledge Namibia’s donation and the significance of the mission, the cheetahs will be loaded onto a private B747 jet. The plane will fly overnight and land in Jaipur, India, by daybreak.

The cheetahs will be transferred from Jaipur to Kuno National Park in the state of Madhya Pradesh by helicopter. There, they will be welcomed into their new home by India’s Prime Minister Narendra Modi, who will open the gates to the Kuno sanctuary created for the cheetahs on Saturday, 17 September – a date that also marks his 72nd birthday.

Dr Laurie Marker, Founder and Executive Director of CCF, said that the conservation of species requires global cooperation. “For more than 12 years, I have consulted with the government of India and their scientists on how to bring cheetahs back to the landscape, and now, it is happening! As a conservationist, I am thrilled, and as CCF’s leader, I am exceptionally proud of the work of our CCF reintroduction team. Without research and dedication to cheetah conservation, this project could not take place.

She added that they are fortunate to have supportive colleagues within Namibia’s Erinidi Private Game Reserve and the Ministry of Environment, Forestry and Tourism.

Prashant Agrawal, High Commissioner of India to Namibia, said that the launch of the cheetah reintroduction plan by the Prime Minister of India is a firm expression of the commitment India has to protect its natural heritage, along with the people who are part of these eco-systems. “We welcome these first individuals as goodwill ambassadors for conservation and our partnership. This initiative is all the more special as it is being implemented at a time when India is celebrating its 75th Independence anniversary.”

The goal of this project is to reverse the tide for cheetahs, to slow, then stop their decline, while at the same time increase the biodiversity and health of Indian ecosystems. “Bringing back a top predator restores historic evolutionary balance resulting in cascading effects, leading to better management and restoration of wildlife habitat, for the benefit of all species, and will uplift the livelihoods of poor forest dwelling communities, ” Dr Jhala Yadvendradev, Dean of the Wildlife Institute of India and Principal Scientist for Project Cheetah, said.
Share it on